Name: Bedbug
Size: Adults grow to 4–5 mm (1/8th – 3/16th of an inch) in length.In size, they are often compared to apple seeds.
Behavior: Although not strictly nocturnal, bedbugs are mainly active at night. Its preferred habitat: mattresses, sofas, and other furniture. Adult bedbugs are reddish-brown, flattened, oval, and wingless, with microscopic hairs that give them a banded appearance. Bedbugs are normally active just before dawn, with a peak feeding period about an hour before sunrise. However, they may attempt to feed at other times, given the opportunity, and have been observed to feed at any time of the day. They reach their host by crawling, or sometimes climb the walls to the ceiling and jump down on feeling a heat wave. Attracted by warmth and the presence of carbon dioxide, the bug pierces the skin of its host with two hollow tubes. With one tube it injects its saliva, which contains anticoagulants and anesthetics, while with the other it withdraws the blood of its host. After feeding for about five minutes, the bug returns to its hiding place. The bites cannot usually be felt until some minutes or hours later, as a dermatological reaction to the injected agents, and the first indication of a bite usually comes from the desire to scratch the bite site. Because of their natural aversion for sunlight, bedbugs come out at night. Although bedbugs can live for a year or eighteen months without feeding, they normally try to feed every five to ten days. Bedbugs that go dormant for lack of food often live longer than a year, while well-fed specimens typically live six to nine months. Low infestations may be difficult to detect, and it is not unusual for the victim not to even realize they have bedbugs early on. Patterns of bites in a row or a cluster are typical as they may be disturbed while feeding. Bites may be found in a variety of places on the body.
Mode: There are several means by which dwellings can become infested with bedbugs. People can often acquire bedbugs at hotels, motels, or bed-and-breakfasts, and bring them back to their homes in their luggage. They also can pick them up by inadvertently bringing infested furniture or used clothing to their household. If someone is in a place that is severely infested, bedbugs may actually crawl onto and be carried by people’s clothing, although this is atypical behaviour — except in the case of severe infestations, bedbugs are not usually carried from place to place by people on clothing they are currently wearing. Bedbugs may travel between units in multi-unit dwellings, such as condominiums, dormitories and apartment buildings, after being originally brought into the building by one of the above routes. Bedbugs can also be transmitted via animal vectors including wild birds and household pets. 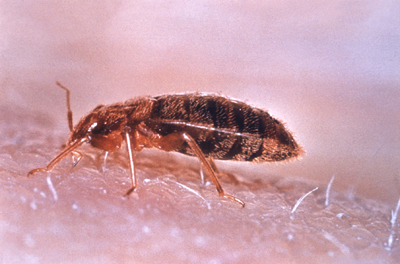 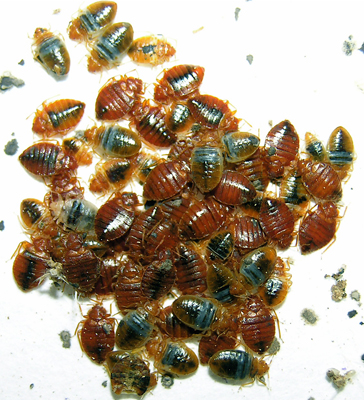 Danger: Maybe, Bedbugs seem to possess all of the necessary prerequisites for being capable of passing diseases from one host to another, but there have been no known cases of bed bugs passing disease from host to host. There are at least twenty-seven known pathogens (some estimates are as high as forty-one) that are capable of living inside a bed bug or on its mouthparts. Extensive testing has been done in laboratory settings that also conclude that bed bugs are unlikely to pass disease from one person to another.Therefore bedbugs are less dangerous than some more common insects such as the flea. However, transmission of Chagas disease or hepatitis B might be possible in appropriate settings.In most observed cases, bites consist of a raised red bump or flat welt, and are often accompanied by intense itching. The red bump or welts are the result of an allergic reaction to the anesthetic contained in the bedbug’s saliva, which is inserted into the blood of its victim. Bedbug bites may appear indistinguishable from mosquito bites, though they tend to last for longer periods. Bites may not become immediately visible, and can take up to nine days to appear. Bedbug bites tend to not have a red dot in the center such as is characteristic of flea bites. A trait shared with flea bites, however, is tendency towards arrangements of sequential bites. Bites are often aligned three in a row, giving rise to the colloquialism “breakfast, lunch and dinner.” This may be caused by the bedbug being disturbed while eating, and relocating half an inch or so farther along the skin before resuming feeding. Alternatively, the arrangement of bites may be caused by the bedbug repeatedly searching for a blood vein. People react very differently to bedbugs, and individual responses vary with factors including skin type, environment, and the species of bug. In some rare cases, allergic reactions to the bites may cause nausea and illness. People commonly respond to bed bug infestations and their bites with anxiety, stress, and insomnia. Individuals may also get skin infections and scars from scratching the bedbug bite locations.

Some Links to information about Bedbugs: