There are two types of bees you will encounter here most often. The European Honey Bee and the Africanized Honey Bee. You cannot tell them apart by looks alone, but their behavior is the tall tail sign. The Africanized (Killer Bees) are very aggressive and attack in large numbers. There are a couple of other types of bees, but not so much of a concern as the honey bees are. You may see a large dark colored bee called the Carpenter bee or a real fuzzy looking bee called the Bumble bee or a bee that looks like a fly, that is the Sweat bee. You may also see wasps. We typically deal with two type of wasps too. The paper wasp and the mud dabber wasp. 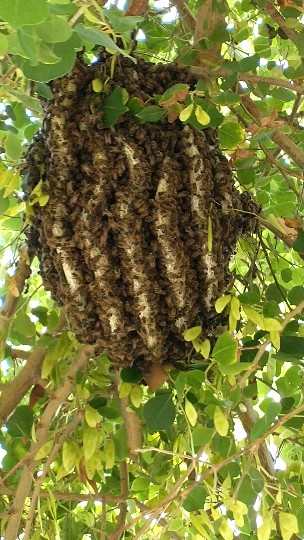 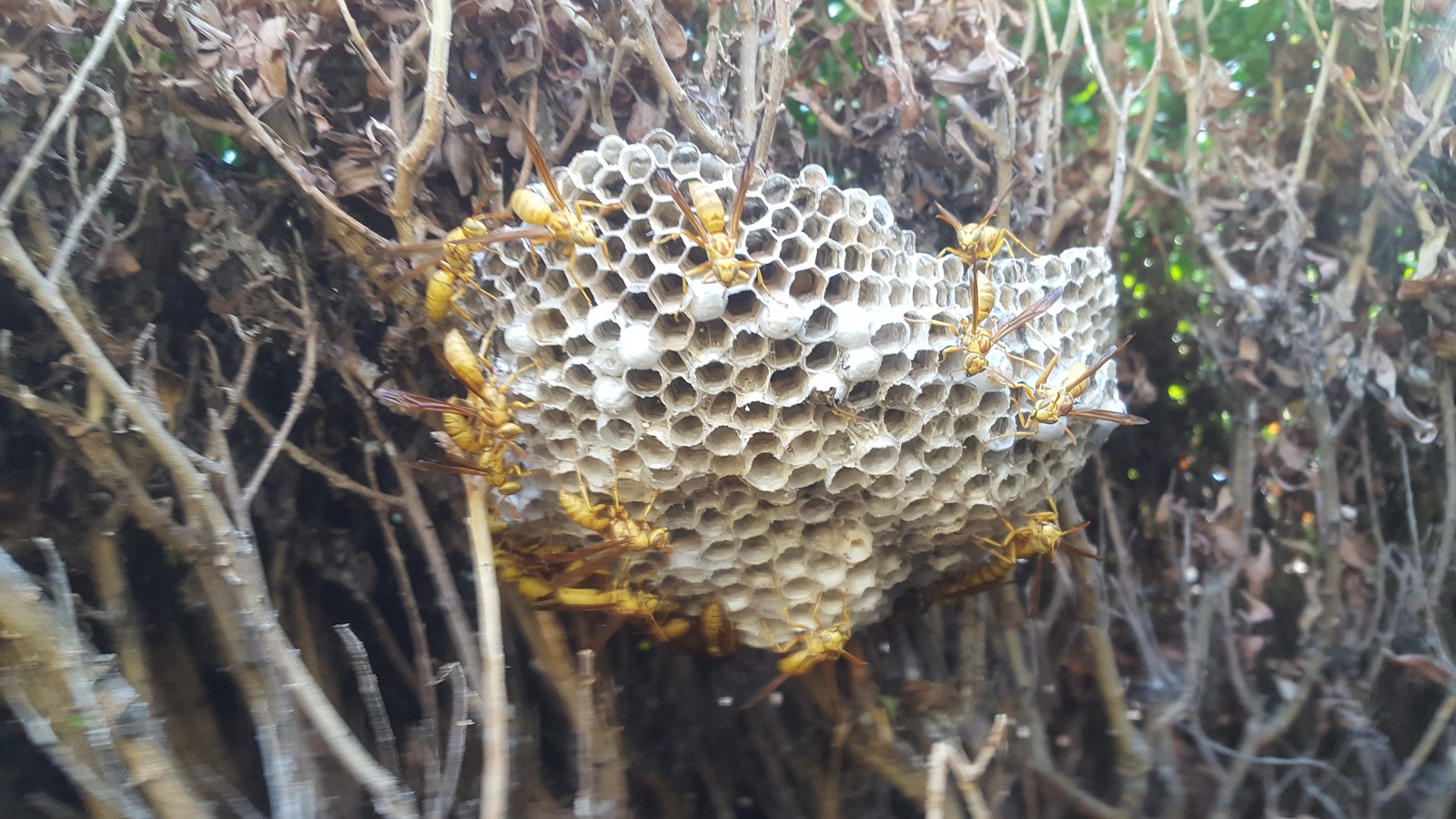 Name: Honey Bee
Size: They vary in size from- 2.1 mm (5/64″) long to a length of 39 mm (1.5″).
Habitat: Bees play an important role in pollinating flowering plants, and are the major type of pollinator in ecosystems that contain flowering plants. Bees either focus on gathering nectar or on gathering pollen depending on demand, especially in social species. Bees gathering nectar may accomplish pollination, but bees that are deliberately gathering pollen are more efficient pollinators. It is estimated that one-third of the human food supply depends on insect pollination, most of which is accomplished by bees. Bees are opportunistic, they will inhabit voids in walls, hole in trees or cactus and water valve boxes or any cavity they can move the colony into.
Danger: Africanized bees are characterized by greater defensiveness in established hives than European honey bees. They are more likely to attack a perceived threat and, when they do so, attack relentlessly in larger numbers. This aggressively protective behavior has been termed by scientists as hyper-defensive behavior. This defensiveness has earned them the nickname “killer bees,” the aptness of which is debated. Over the decades, several deaths in the Americas have been attributed to Africanized bees. The venom of an Africanized bee is no more potent than that of a normal honey bee, but since the former tends to sting in greater numbers, the number of deaths from them are greater than from the European honey bee. However, allergic reaction to bee venom from any bee can kill a person, and it is difficult to estimate how many more people have died due to the presence of Africanized bees.
Other: As in a few other types of eusocial bees, a colony generally contains one queen bee, a fertile female; seasonally up to a few thousand drone bees or fertile males; and a large seasonally variable population of sterile female worker bees. Details vary among the different species of honey bees, but common features include: Eggs are laid singly in a cell in a wax honeycomb, produced and shaped by the worker bees. Larvae are initially fed with royal jelly produced by worker bees, later switching to honey and pollen. The exception is a larva fed solely on royal jelly, which will develop into a queen bee. The larva undergoes several moltings before spinning a cocoon within the cell, and pupating. Drones hatch from unfertilized eggs, females (Queens and worker bees) hatch from fertilized eggs. The queen actually can choose to fertilize the egg she is laying, usually depending on what cell she is laying in. Young worker bees clean the hive and feed the larvae. When their royal jelly producing glands begin to atrophy, they begin building comb cells. They progress to other within-colony tasks as they become older, such as receiving nectar and pollen from foragers, and guarding the hive. Later still, a worker takes her first orientation flights and finally leaves the hive and typically spends the remainder of her life as a forager. Worker bees cooperate to find food and use a pattern of “dancing” (known as the bee dance or waggle dance) to communicate information regarding resources with each other; this dance varies from species to species, but all living species of Apis exhibit some form of the behavior. If the resources are very close to the hive, they may also exhibit a less specific dance commonly known as the “Round Dance”. Honey bees also perform tremble dances which recruit receiver bees to collect nectar from returning foragers . Virgin queens go on mating flights away from their home colony, and mate with multiple drones before returning. The drones die in the act of mating. Colonies are established not by solitary queens, as in most bees, but by groups known as “swarms”, which consist of a mated queen and a large contingent of worker bees. This group moves en masse to a nest site that has been scouted by worker bees beforehand. Once they arrive, they immediately construct a new wax comb and begin to raise new worker brood.

Some Links to information about bees: